AGDOR - Three-way local agreements to create an inclusive labour market A Swedish EQUAL project believes that the way to integrate long-term disabled and unemployed people into the workforce is through the practice of regional social responsibility, implemented by local three-way partner­ships. Such partnerships are now being piloted in five areas, involving not just the public authorities, but small businesses and the social economy as well.

Why are social firms – enterprises that have the express goal of employing disadvantaged people – important? Because they offer the key to reducing the unsustainably high number of Swedes – 1.2 million, or 13% of the population – who are excluded from the workforce. The role of indep­endent enterprises that employ people with disabilities is sure to grow rapidly, as a result of the govern­ment's policy of winding down the national social employment company Samhall, which employs 23,300 people, of whom 21,700 are disabled.

"We have demonstrated that many people who are currently on long-term sick leave are capable of working – they just need someone to push and support them, and AGDOR does this through empowering them," says the AGDOR project's transnationality co-ordinator, Gordon Hahn.

The AGDOR partnership's contention is that a three-way partnership is needed between the public, private and social economy sectors. Such a partnership can manage a common local agenda to improve both labour market integration and the quality of social services.

Karlskoga, the cradle of three-way partnership

The project started at the initiative of the county council of Örebro, which serves 275,000 inhabitants and is located in southern Svealand midway between Stockholm and Göteborg. It arose from a small initiative involving just one dynamic social firm, Zoom, in the nearby town of Karlskoga, in a three-sector collaboration with the municip­ality and the local small business assoc­iation, Möckelnföretagen. The proj­ect aimed to resolve the paradox that skills shortages and graduate unemploy­ment could exist at the same time and in the same place. Zoom had access to people who though professionally educa­ted were mentally or physically disab­led, and hence unemployed. It matched them with small com­panies that could not afford the services of the established consultancies. Zoom employed people who had effectively been prematurely pensioned off. At that time, people who were not fit enough to work at least 80% of a full-time job could not work at all, but Zoom is now able to employ people who work only 30% of full time. It thus brings them back into the labour force, raising activity rates in line with one of the goals of the Lisbon strategy.

The model seemed worthy of expansion, and when the EQUAL development partnership was formed it had swollen to involve a dozen organisations across Örebro county.

The partnership's key activity has been to bring about local agreements between the three sectors which create space for new solutions to social problems, empower excluded groups to show their abilities, and meet new needs by supplying new types of services, through setting up self-sufficient enterprises. Rehabilitation and flexible learning are watchwords. 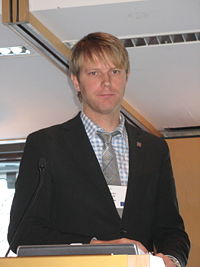 Such agreements are now operational in five of the 12 municipalities that make up Örebro county, and a regional council has been established to provide a forum for ongoing discussions between the three sectors.

What do the agreements cover? The 'Local Agreement for Sustainable Development' is typically signed by the Labour market Office (Arbets­för­medlingen), the social insurance office (Försäkringskassan), the small business association (Företagarna), the municipality (kommun) and the co-operative development agency (lokal kooperativa utvecklingscentrum). It states the common understanding that a new perspective is needed on social development and growth, and that the tasks involved should be seen as investments rather than costs. It then defines a clear process through which citizens may decide to become entrepreneurs, setting out phases, aims and stakeholders, as well as indicators that can be used to monitor progress.

The project is also working on improving the practical side of partnership, which is to say, the public procurement process. "The new Swedish government plans to marketise the healthcare system, so it is vital that we acquire best practice in ensuring that social criteria are included in procurement contracts, and that social return is measured. But strangely, we have not come across any cases of social clauses being implemented. In a way this is encouraging, because it means that social enterprises are quite capable of winning pubic contracts even on the historically narrow price and quality criteria," says Mr Hahn.

The project has also included direct training and incubation support to new social firms. This has largely been delivered by CESAM (the Centre for Mobility and Social Development) in Örebro, using a specially designed methodo­logy for democratic meetings, in order to achieve highest possible participa­tion and to initiate capacity building among participants. This works by putting subjects through a three-month activa­tion process, which focuses on their capabilities, not on the barriers they face. "The message is that you are a resource for society, not a burden on it," Mr Hahn explains. The individual development plans that are the end result are currently in place for some 50 long-term unemployed bene­ficiaries. "The process is entirely volun­tary, and benefi­ciaries are free to leave if they wish," says Mr Hahn. "So far, we have successfully retained about 40% of the beneficiaries. The irony is though, that when we are successful in integrating someone, we lose the subsidy for them in the project"

The beneficiaries face various types of disability. Most of the clients are over 50 years old, with both sexes being evenly represented. The method has had some heartening successes. One client who had never worked, and had been placed on sick leave two years ago. He had grown thoroughly distrustful of a system that was telling him he was good for nothing. Now, along with three others, he has gained the confidence to start a co-operative.

All institutional sectors on board

What do the three institutional sectors bring to the table? The public sector brings a democratic legitimacy and a responsibility to the population, along with tax revenue to spend on providing public services. The private sector brings a need for labour, and the social economy contributes its know-how in social development, a drive to achieve social innovation, and a closeness to excluded groups, which put it in a privileged position to design and deliver services.

The AGDOR partnership itself includes the three sectors of course. The lead is taken by the L&SEK association, the other two partners being the small business association Företagarna i Örebroregionen, and the social economy organisation PUST. L&SEK's mission is threefold, to:

It aims to bring together the skills, interests and resources needed to strengthen local development and the social economy in the county. Its membership comprises public and social economy actors including among others the county council, the association of municipalities in the county, the village councils, farmers' federation, tenants' union, sports confederation, adult education association, folk high schools, Örebro University, the regional 'Carrefour' information office, the CESAM and Activa foundations, the SERUS consultancy and the Zoom and Kullen co-operatives. Also on board is the social insurance office, which has the fundamental job of recruiting the beneficiaries. Funding comes largely from the council and the other members. Mr Hahn is very happy that LO, the country's major trade union, is in membership, as this helps to guarantee respect for good working conditions in social firms. Curiously, one potential actor that is not represented is the consumer co-operative movement.

Another important member is the Örebro credit guarantee association, which was founded a year ago. Like a credit union, its function is to collect investments from individuals, companies and municipalities, with which it can provide guarantees to people and enterprises, including social firms, who are seeking loans. "We have no powerful independent local banks in Sweden any more that could fill the gap on the local level," says Mr Hahn, "so we are trying to create financial institutions on the Italian model."

There is an important dimension of local solidarity to this successful partnership, which Mr Hahn puts down to the higher level of social capital that the Örebro region is fortunate enough to possess. "For instance we are working well with the local branch of the entrepreneurs' association, but it is inconceivable that we could get the national organisation on board."

A fifth topic, support structures, is the subject of a programme of exchange visits.

The Swedish partners' chief goal is to assess what type of support structures are most approp­riate, and two strong models are available in the Italian consortia and Britain's national Social Enterprise Coalition (SEC). Through the partners' efforts, a national partnership organisation for social firms has been established in the form of 'PUST', which roughly translates to 'Phew!'

A second important learning objective concerns the three-way local agreements, which have a close parallel in the 'district agreements' that have been signed in Milan thanks to the work of the Agenzia di Cittadinanza EQUAL partnership. "Lombardy is a big region and has a population of 9 million just as Sweden has, so it is a credible model for our work in Sweden," says Mr Hahn.

A third lesson was derived from the study visit that was undertaken to Nottingham in the UK in the spring of 2006. "We found that the British system is much more flexible than the Swedish one, much more enterprise-friendly, and this helps minorities such as Somali immigrants to integrate," says Mr Hahn. "In Sweden, migrants have a two-year introduction into the Swedish system, after which they are encouraged to go to the labour market office and apply for jobs – which they are not offered. The system is almost designed to make people passive."

Reciprocal study visits have been held, and a major European conference takes place towards the end of 2006. Its first day is to focus on the idea of 'regional social responsibility' (RSR) while the second day will deal with the measurement of social added value.

A model with national scope

AGDOR aims to see the tripartite model it is piloting spread nationwide. Mr Hahn foresees two patterns of adoption, with some municipalities being keen to sign local agreements straight away, while others will opt for an incremental approach. "The municipalities and local labour market offices are already have a dialogue, so we propose that they broaden this to include the private and third sectors." Mr Hahn says this is more a matter of practice than principle. "Even if the policies are well conceived, the crucial issue is to improve local implementation. At the moment, each sector works in its own 'drainpipe' or 'silo', but we need them to build horizontal links with each other as well as within the representative sector. We need everyone to recognise that regional social responsibility is not the job of the public sector alone."

But how will it bring about this structural change? It is already feeding its evaluation results through to the government, and co-ordinator Per-Erik Andersson attends the EQUAL national thematic group on the social economy regularly. "Professor Stig Larsen of Lund University is conducting an evaluation of our work from the beneficiary perspective, which we find is very persuasive," says Mr Hahn. Meanwhile Göteborg University is evaluating its competitiveness aspects and the partnership model. Göteborg has also launched an innovative course on the social economy as a market player. The project will be publishing a guide to best practice in regional social responsibility, which has audiences at three levels: European, national and local. To convey the arguments at political level, the partners have direct contact with the main parties.