There is much that local communities can do to improve the quality of their members’ lives, by setting up enterprises through which residents provide services to their own neighbours. At the same time this opens up the chance for long-term unemployed people – especially women with children – to obtain work with external employers. The neighbourhood service model combines multiple activities with multiple sources of finance, the most important in this case being service vouchers.

The Werk.Waardig partnership, based in Kortrijk in Flanders, aimed to spread the successful experience acquired in the first round of EQUAL in the suburb of Kuurne to all 13 municipalities in southwest Flanders. Two new schemes are now up and running, and research is under way for a third. The project has also developed a certificated course for development workers, which will be launched in 2007. 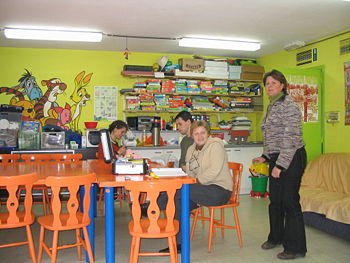 In the first round of EQUAL, the Southwest Flanders Welfare Consortium worked in four localities: Zedelgem, Zeebrugge, Menen and Kuurne. Its most impressive achievement is in Kuurne, on the northeastern edge of Kortrijk. BIK (Buurteconomie-Initiatieven-Kuurne) BIK website is located in the Spijker & Schadauw estate, which was built in the 1980s and consists of some 125 grey-brick low-rise walk-up flats housing an estimated 500 people.

The project’s underlying philosophy is to improve the quality of life in the neighbourhood by activating the residents, an undertaking which has both employment and educational aspects. It therefore has a set of mutually supportive aims. On the employment side, it both creates jobs locally and, by virtue of the services thus provided, enables residents to obtain and hold down jobs with external employers. But it starts at a deeper level, by breaking down the isolation some of the residents experience. “About 40% of the residents of this estate are immigrants, but they come from 26 different countries and don’t form a single community, so they can become very isolated,” says Jan Verfaillie of BIK. They often find it difficult to deal with institutions such as schools. We have good contact with them, so we can bridge the gap between the parents and the school. For instance we run parents’ groups that discuss issues such as punishment or the parent’s role in the education process. We also operate an after-school club which is particularly helpful in improving the children’s Dutch, which is an area where immigrant parents need support.”

Flexible childcare is the key

A thorough needs analysis told them that the principal problem is the lack of childcare. The official nurseries are aimed at two-earner families, operate for the whole day and have long waiting lists. Yet there were no facilities where a parent who wanted to go to a job interview, or even a doctor’s appointment, could leave their child. The project therefore introduced a major innovation. It piloted short-term and flexible childcare, and managed to persuade the Flemish regional childcare authority, Kind en Gezin, to subsidise the scheme. “We had been trying for 15 years to find a way of serving the childcare needs of this section of the population, so it is a major mainstreaming achievement,” says Johan Dejonckheere of the Welzijnsconsortium. Staff are released for one day per week to study for a childcare qualification. 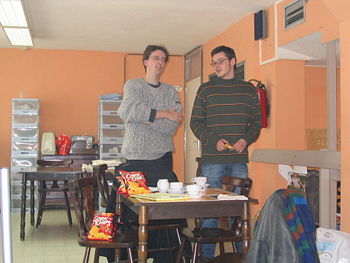 Today, BIK employs 68 people on a range of activities under its aegis, including a canteen (‘t Gebeurtje), short-term childcare (up to four hours) at Baloe (‘Baloo’), the Vlindertjes (‘Butterflies’) after-school club, an odd-job service, help with shopping, mending, and recycling. The estate is lucky enough to have a small field behind the main building, with room for a chicken coop. “We encourage the residents to bring their organic reuse for composting,” Mr Verfaillie explains. “If they are lucky they get a free egg for their trouble.” The miniature farm doubles as a pleasant open-air meeting place and picnic area. Having grown so fast, BIK has now entered a phase of consolidation, and is focusing on achieving financial and organisational stability. It has learnt a lot from an audit by the social economy advisers Hefboom.

In October 2010 Baloe moved to larger premises at Kortrijksestraat 12, where it has room to care for for 22 children.

One lesson from the experience of ‘t Gebeurtje canteen is that a mixed use brings mixed clients. A simple bar will not attract immigrants from cultures that discourage drinking alcohol and socialising with women. However locating the computers in the same premises leads to a much wider range of customers. Colocation also increases flexibility – for instance if too many children arrive for the after-school club, then staff can swap around.

The chief aim of the Werk.Waardig project has been to create a support unit for local authorities throughout SW Flanders, to help them exercise the new powers they have been given. In Belgium, each municipality has two authorities, the gemeente (commune) and a separate social services authority, the OCMW – Openbaar Centrum voor Maatschappelijk Welzijn (CPAS – Centre Public d’Aide Sociale). Responsibility for what is called the ‘new service economy’ lies with the gemeente, while that for social services lies with the OCMW. Werk.Waardig therefore works with both types of authority to both strengthen existing neighbourhood service schemes, and start up new ones.

The main tool they are using to support the existing schemes is the ‘table of exchange’, led by BIK in Kuurne and covering the whole province of West Flanders. For the last year, this has enabled the dozen or so projects that exist to meet every couple of months to compare notes on how to adapt to changing circumstances.

With its field staff of six half-time development workers, the project has also been delivering direct support to neighbourhood services initiatives in Southwest Flanders. Two new schemes are operational, and a third is in the research stage.

In Harelbeke, adjoining Kuurne, the municipality wants to help elderly people to stay for longer in their own homes, by supplying services like shopping, home maintenance, gardening and taking rubbish to the container park, along with more technical tasks such as installing mobility aids and smoke alarms. An association has been set up, a business plan and financing plan completed, and a co-ordinator appointed. It aims to be employing five full-time equivalents by July 2007. In Zwevegem, Werk.Waardig aims to create five full-time equivalent jobs carrying out tasks such as cleaning bus shelters and market places. And In Waregem, the OCMW has decided to start by surveying the needs of elderly people. One possibility is to offer a ‘library at home’ service. A second action research project is under way among long-term unemployed people. Taking a bottom-up approach to activation, it aims to motivate them through convening voluntary groups to discuss employment issues. Meanwhile in Avelgem and Wevelgem exploratory discussions are under way, and results can be expected later in the project.

The project also supports neighbourhood service schemes that existed before EQUAL came along. Such is the case in Wervik, Menen, where the schemes are benefiting from advice on how to adapt to the changing legal and financial framework. 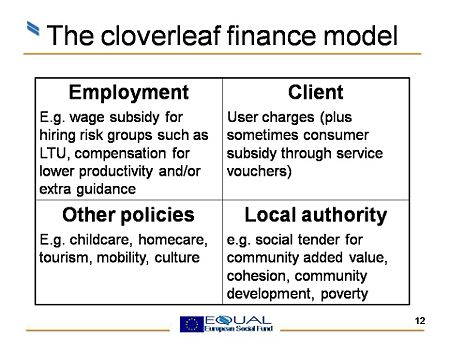 Werk.Waardig promotes a model in which multiple activities are financed from multiple sources. It pictures this as a leaf of clover, in which each leaflet contributes to a healthy and balanced whole. “The revenue we earn from providing services is a crucial part of the mix,” says Mr Dejonckheere. “We get wage subsidies for employing people who were formerly unemployed, we get some income from the authorities for providing services such as childcare, and we earn sales revenue from end-users of the services. To take the example of BIK in Kuurne, which is the project that has pursued the commercial route most energetically, about 45% of revenue comes from service vouchers, 13% from the King Boudewijn Foundation’s ‘Experimentation Fund for the Social Economy’, 20% from wage subsidies, 15% from subsidies for specific services and about 8% in sales to the public.

In 2007 the funding regime will change for the better, and will acknowledge neighbourhood services within its structure. The ‘Experimentation Fund’ is to be superseded by a new Flemish decree promoting the ‘local service economy’, a concept that includes neighbourhood services on the participative Kuurne model, but also jobs created in a more top-down way. Mr Dejonckheere hopes the area will benefit from grant aid of €8,000 per full-time equivalent job created for people who have been unemployed for more than two years, and welcomes the higher level of financial stability this will bring. It comes, however, at the cost of the loss of some flexibility in how the funding is spent.

Partnership is a key principle, whether at regional, provincial or municipal level. BIK started as a three-way partnership between the municipality of Kuurne, the housing company that owns the Spijker & Schadauw estate, and the local OCMW (public social welfare centre), who between them provided a community worker, office premises and an operating budget. Service provision started when the community worker identified services that were not being provided, even though some of them were included in the rents being charged, such as the cleaning of the communal stairs. BIK then took over those services and built from there. For instance today it has three odd-job men, who help residents with maintenance tasks and charge for materials, but not for labour.

To start the service, the municipality and the OCMW each invested €25,000, which was enough to operate with two part-time staff plus some personnel seconded form elsewhere. The project occupies empty shop units, rented relatively cheaply from the housing company. “In fact, our being here is a benefit to the housing company, as the activity we create enhances the value of the surrounding premises,” says Mr Dejonckheere. 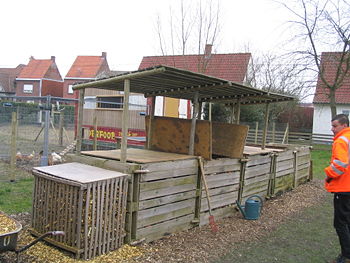 These innovations at local level are making an impact on broader policy. The pioneering work West Flanders has done as regards neighbourhood services has been noticed, and the project meets regularly with one of the Flemish social economy minister’s political advisers. The Flemish child welfare agency Kind en Gezin has recently announced that it is to extend the experimental support it gave for the flexible childcare pilot in Kuurne, and has confirmed funding for a further three years. However this more responsive approach to childcare funding is not automatic all across Flanders, as each case is considered on its merits. A head of steam is also building behind the idea that neighbourhood services deserve better regional support. As with the idea of social enterprise start-up centres such as De Punt in Ghent, the model of more closely combining business support and community development seems to be catching on.

Yet managing multiple income streams brings its own headaches. In the course of the project’s work, it has become obvious that some local authorities would like to benefit from having neighbourhood services on their patch, while avoiding the burden of setting up their own legal structure to administer them. Werk.Waardig is therefore considering setting up a province-wide agency to employ neighbourhood service staff in a number of municipalities.