Roma co-operators Together for Each Other in Cserehát

AEIDL’s board visited a rural development programme in Hungary, and witnessed contrasting approaches to local economic development among the predominantly Roma community.

Mud-brick houses set end-on to the village street, with a shared water pump on the road outside, ornamental chickens scratching in the dusty yard and horses chomping in the stalls. An old loom awaits restoration in the earth-floored front room. A pile of chainsaws is stacked on the verandah, and a slightly battered blue minibus stands outside. A sumptuous spread of freshly-made sausage covers the table nextdoor. Such was the sight that greeted the visitors from AEIDL in the straggly village of Fulókércs in the Cserehát region of north-eastern Hungary when they made their local development study visit on 5th November 2011. 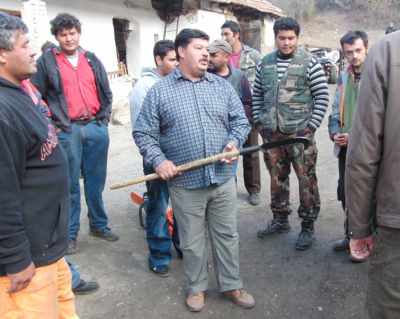 Left: Imre 'Zorro' Mata, leader of the Együtt Egymásért ('Together for Each Other') social co-operative in Fulókércs, Cserehát, Hungary

Fulókércs is home to 300 people, 70% of whom are Roma. It is a notable village because thanks to resident Imre Mata (nicknamed Zorro) it is home to a sustainable worker-owned business. Unemp¬loyment is high in the area, and economic opportunity is limited. Local people have no ownership of the natural resources, since the land and forest were privatised after the collapse of the communist regime. This effectively limits them to selling their labour to the landowners. The Együtt Egymásért (‘Together for Each Other’) social co-operative survives on income from forestry work carried out for landowners in the region. The business assets consist of half a dozen chainsaws, the horses – and a slightly battered blue minibus. The minibus is crucial, as without it the men could not reach the forests where they work.

Zorro feels privileged to be able to do the work he likes. He started as an assistant to a Dutchman named Kees Bakker, who managed the work of the Together For Ourselves Foundation. The foundation’s original aim was to relieve poverty, but it started to develop economic activities, and found it had started a social enterprise without knowing it. The co-operative was spun out of the foundation, and Zorro took on the managerial role. Its capital needs have been met by two grants of $5,000 and $10,000 from the UNDP Cserehát programme which enabled it to buy equipment such as chainsaws and the all-important minibus. Upon its formal establishment as a co-operative in 2010 it won a further grant of €100,000 from the EU which has paid for the building, training and a wage subsidy to allow it to take on new members.

The co-op is now financially sustainable and can live from its forestry contracts. It has grown from its seven founder members to employ 12, with a further dozen in the process of joining. On top of that it sometimes employs casual workers, and is occasionally able to offer the whole village population a day’s work. Most of the members are men, but there is a kindergarten in the village and women work on jobs such as planting seedlings.

Diversification is under way: a loom has been acquired, and the co-op has plans to go into weaving carpets and tapestries. Katica, Zorro’s wife, sees a future in growing organic vegetables. But a move into timber processing, which would add more value and pay more wages, is hindered by a lack of investment capital. “We cannot expand into manufacturing because we don’t own the wood,” Zorro explains. There is however one potential growth path. Nowadays, obtaining firewood is a problem locally, and the co-operative could process offcuts into wood chips to sell as a heating fuel – if only it had €16,000 for a chipping machine. “We can’t do anything without capital,” Zorro says, “but we don’t want to borrow it. That would be very dangerous.”

At nearby Abaújszántó a second source of jobs owes its existence to an outside entrepreneur who runs a temp agency employing 5,000 people and saw an opportunity to take advantage of the region’s low wage levels. Off a yard opposite the village hall is a sewing workshop where 40 local women work at sewing machines and presses to assemble high-fashion clothing for global brands such as Dolce and Gabbana. Despite the high prices that such items bring, the women earn only the minimum wage – as low as €180 a month, or €240 for the more highly-skilled among them. The women are glad of the work, even if they don’t think much of the quality of the clothes they make. The company is not yet accredited to the wage subsidy regime that applies to firms employing disadvantaged people, but it plans to apply.

Local men benefit from the income brought by this social firm too. In a shed just up the street is a collection of hoppers, a grading table, and pallets stacked high with tiny grey poppy seeds. In an operation unique in Hungary, the company cleans poppy seeds from around the country for use by a pharmaceutical firm.

Thirty kilometres down the road at Szikszó, a third and more capital-intensive project is resolutely commercial and targeted at export markets. The factory that manufactures and packages the Hell energy drink, which opened earlier this year, is a very visible piece of inward investment. Strategically located on highway 3, which leads from Budapest to Košice in Slovakia (which was historically the regional capital), it cost 4.5 billion forints (€15m), and is painted the same garish scarlet colour as the drink cans it produces. Though the factory allows Hungarian-owned Hell to repatriate its overseas canning contracts, even such an expensive investment has only created about 50 local jobs.